WhatsApp rolls out self-destructing message feature. How it works

WhatsApp is gradually rolling out the much-awaited self-destructing message feature for its Android Beta version. The Facebook-owned messaging app is still working on this update to provide a more stable and bug-free experience to its users before releasing the feature, according to WABetaInfo, a fan website that tracks the app’s updates. The update will automatically delete a message after a particular period of time as set by the user.

The feature is being simultaneously rolled out on the Beta version number 2.19.348. Users who have enrolled themselves for Google Play beta programme can download the latest version. Alternatively, you can also manually update the app by downloading it from the APK available on APK Mirror platform.

As the feature is still under development, all Android users may not be able to see an update notification on their Google Play Store. Reportedly, WhatsApp has renamed the feature’s name from ‘Disappearing Messages’ to ‘Delete Messages’ before the official roll out.

How the ‘Delete Message’ feature works:

According to the blog, the feature will be initially available for group chats and can be enabled by the group’s administrators. Once enabled, the feature can be toggled in Contact Info or Group Settings. Once available, the ‘Delete Message’ feature will come with a toggle on/off button and users can choose a particular time interval for the messages to automatically disappear. There are five options for time intervals to choose from – 1 hour, 1 day, 1 week, 1 month and 1 year. Accordingly, the messages sent to that chat will disappear. For instance, if the user opts for 1 hour time interval, the messages sent post-selection will be deleted after an hour. The feature is not a new feature in the app market. Other social apps such as Snapchat, Telegram already rolled out this feature quite a while back. In fact, WhatsApp is late in following suit. 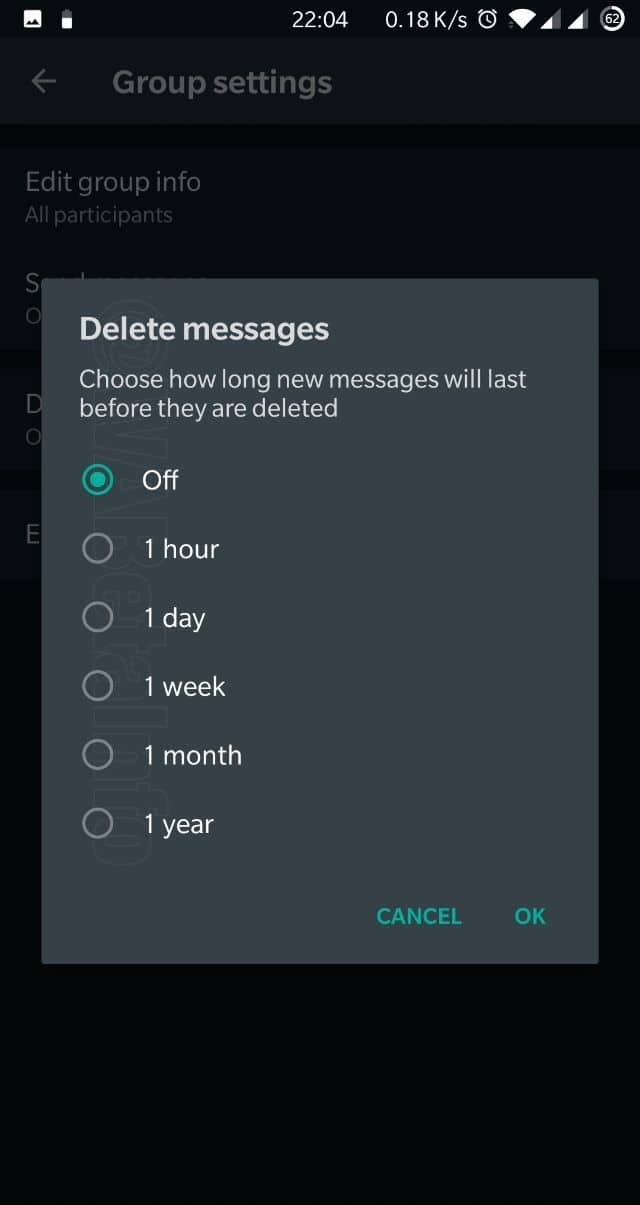 ‘Delete Message’ vs ‘Delete for Everyone’:

Unlike the ‘Delete for Everyone’ feature that already exists in the popular messaging app, ‘Delete Message’ feature or the disappearing messages feature will automatically delete or in fact make the messages “disappear” in a way that it would seem like the message never existed.

In case of the former ‘Delete for Everyone’ feature, once the user deletes messages manually, the app displays, “This message has been deleted” on the chat screen.

Coming to the dark mode feature, WhatsApp may soon roll out the ‘Dark Mode’ feature on phones starting with iOS 13 users, as reports suggest. WhatsApp however, has not officially confirmed as to when the feature will be live.

Remdesivir For COVID-19 Treatment To Be In Market By Month-End: Sources